This blog reproduces an interview in the January 2017 edition of The Methodist Newsletter with Anne Hailes.

When I read Anne's piece before it went to press, it was a delightful surprise to discover that Anne actually knows the man whose support triggered this #TimPageFitForLife project.

“In summer 2013, we were planning a five-year survival bar-be-cue.

Unfortunately, one month short of this cancer-free milestone, I was more seriously ill than ever before – tumours through my body, jaundiced, unable to sleep & hallucinating.

Non-Hodgkin Lymphoma was back with a vengeance.”

Tim acknowledges that we all face challenges yet he has had more than his share.  Despite this he is an example of a man who just keeps on being positive and depending on his faith and the doctors to get through.  He has been treated for aggressive blood cancer four times since September 1984, when, as a 20-year-old BT placement student, he had a routine chest X-ray.

“Within hours, I was in the Royal Victoria Hospital, Belfast, diagnosed with Hodgkin’s Lymphoma.  Five months of chemotherapy and a month of radiotherapy followed.  The treatment was severe, my dad was dying at the same time and, some days, I felt the bottom had fallen out of my world.”

On one of those days he had to escape the demons in his head and he turned to John Frost, his old headmaster at Sullivan Upper School in Holywood.

“I landed at Mr. Frost’s front door and he immediately recognised a level of distress beyond words, I just broke down, I couldn’t say anything.  He and Mrs. Frost sat me down with a cup of tea.  I thought ‘my cup runneth over’ – a cup of tea goes a long way to help!  The Frosts showed me kindness and understanding.”

Tim was getting back into the swing of life when he was dealt another blow. Two years later he was told the cancer had returned and what should have been a red-letter day turned into anything but.

“I’d just completed computing science at the Ulster Polytechnic as it was then.   On the same day I was told the cancer is back, the job offer I’d been promised was withdrawn because of my health problems.   The world fell apart.  The most helpful person was an atheist friend who said

"You've got to look at it this way, Tim.  As one door closes another one shuts!"

I actually derived lots of laughter at that.”

But it wasn’t over.  May 2008 brought the shock news that a large lump in his neck was due to aggressive Non-Hodgkin’s Lymphoma.  Blood cancer treatment had progressed dramatically which meant chemotherapy could be administered as an outpatient and it killed the cancer in 12 weeks.

However, Tim, his wife Ruth and twin sons Downey and Chris, then 19 years of age, were to be tested again.  In summer 2013, the family were planning a five-year survival bar-be-cue, when one month short of this cancer-free milestone, Tim became more seriously ill than ever with tumours throughout his body, jaundiced, hallucinating and unable to sleep. Non-Hodgkin Lymphoma was back with a vengeance. 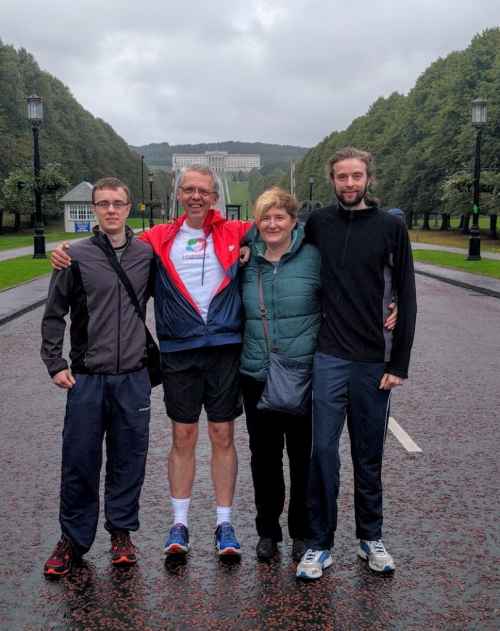 “I was close to death and there were groans beyond words going Heavenwards about myself and my family; there’s a comforting aspect as God can draw near and hear but there’s also the Psalmist’s spirituality of lament and Jesus saying ‘Let this cup pass from me’.  I think a big thing for me is to know that you can shout at God and cry and sometimes just whinge because we are His little children.”

It was their 'Year of Hell', in hospital for five months, with a 50/50 chance of survival, he was planning his 50th birthday party and funeral service at the same time.

Thankfully, it was the birthday party that people ended up attending!

“Since then my motto is,

If there’s something in life to celebrate, then celebrate

because there’s enough difficult stuff going on.  A couple of months ago, I appreciated walking down the road and looking at one falling leaf as it fell to the ground.  As well as the challenges of work, paying the mortgage, there are moments of beauty all around.”

As he regained fitness this special man turned to running.  He uses it to release stress, get fresh air, keep endorphins flowing, for company or solitude.

“Sometimes I’m thinking about everyday life and pressures, other times it’s a time of internal reflection, zoning out at a spiritual level.  There’s a phrase that I love in the hymn Dear Lord and Father of Mankind

'The Silence of Eternity'

Something of this can happen when I’m running or on a retreat, an experience that I don’t understand but one that I treasure.

At work a couple of days ago, a Director asked me how I was, I think he was surprised with my answer.  I told him - I’m alive, I have a family and they are well, I’m mobile, I have a sane mind, I’m doing work that matters, I look back at the running project that succeeded so I’m grateful for every day.” Having been in hospital six months, seven pumps keeping him going, being in isolation and not being able to move out of bed it might be surprising that, in September three years later, walking into work to lead the stem cell Donor Drive with Ruth, he told God he had no complaints about his journey.

“I am thankful to be alive today; you know, you can maybe understand life looking backwards but you have to live it looking forwards, in the moment we don’t see the big picture.  I did despair at times, not surprising when your blood count and your energy is low and the doctor says it’s 50/50 so you're writing your funeral service and you feel awful; then you realise despair is OK, it’s not the final word and it doesn’t apply to your whole life.  I thought about my sons and my wife, their concern and what would they do without me being there.  When you’re a young man in your early 20s it’s rough but probably you don’t have dependents, when you do have loved ones who are dependent then that’s a different level of concern.”

During these toughest of months, Tim says he gained an acute appreciation of the precariousness and preciousness of life.  He came to see profound significance in small acts of kindness, for example the offer of midnight tea, hot toast and a chat with one of the exceptional nursing assistants.  He also had a renewed appreciation of research and was determined to do something practical to help. He knows that prayer is important but the drugs and the treatments are just as essential, as he says God is present in all things including research.

Along with this renewed sense of positivity came a sense of responsibility to build his fitness. So, he now has a personal trainer and attends the gym every week and is training to be a coaching psychologist.

“Early last year I discovered parkrun where, every Saturday morning, in 24 public parks across NI, people come along to do a timed run.  I ran my first parkrun at Victoria Park last November, finishing in 162nd place out of 162!  I found myself overwhelmed by uncontainable emotion on achieving an objective that would have seemed unimaginable when I was ill.  82-year-old Gerry Ward was the sole remaining volunteer waiting for this straggler.  Looking back, I now see that his presence, encouragement and positive words were the key link in the chain that led to a seven month ‘#TimPageFitForLife’ running project.” 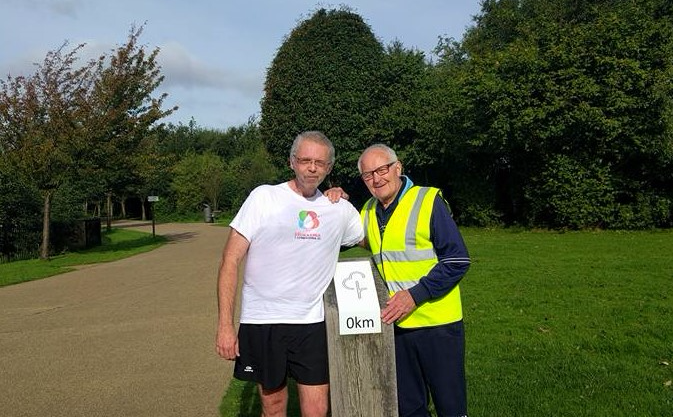 Gerry Ward remembers that day too.  “We were just clearing up the finish area after the run and I became aware of this chap sitting and to all appearances crying. I toddled over to ask if he was ok thinking he might have fallen during the run but in the course of conversation I found out that the tears originated from his satisfaction of completing the run. He indicated that during his periods of therapy his main ambition, when fit enough, was to undertake the 5k run.  You talk about uncontainable – well, I certainly felt similar after my chat with him and to some extent felt a bit inferior.   I’m fortunate in so many ways to be an integral part of the core volunteer group of our Saturday run, made all the more special by people like Tim who inspires all around him.”

Within months the objectives of this project were in place.  To run all the Northern Ireland parkruns in aid of Lymphoma and Leukaemia NI at Queen’s University.  He has raised £15,253 for LLNI and signed up 197 prospective stem cell donors with charity DKMS.  He’s proud that lives will be saved in years ahead when someone receives a stem cell donation.

BT colleagues at Tim's final run, 24-Sep-2016, 32 years to the day after he first went into hospital

Tim himself has increased his fitness getting through all the runs, bringing down his time from 40 minutes to under 35 minute and, he laughs, even when running in the rain the sense of achievement is great.

But it’s not only fundraising, spreading the word about blood cancer and treatment is vitally important to this brave man.  He has published six video interviews about blood cancer treatment, research and the important role of fitness in staying well: “And thank God I am fitter and stronger than I’ve ever been.”

He’s surprised and thankful for the sheer goodwill of so many people in funding his project and giving their support.  Indeed, Tim is clear that ‘through the years, the support received along the journey from Ruth, family, friends, colleagues, professionals and so many others has helped get me through.’

“On the way back from Cookstown parkrun, I had a conversation with a friend David Quinney Mee.  His daughter, Lucia, had just been on Radio Ulster promoting organ donation. Lucia, age 17, has had three liver transplants, and great success at the UK Transplant Games.  David said to me:

In other words, in the great scheme of things, never discount the power of the small to inspire, to sustain and to give hope, whether it’s planting a tree, sharing five loaves and two fishes or encouraging someone struggling in their own race through your words, your support and your presence.”