Driving to the 22nd of Northern Ireland's 22 current parkruns (several new venues are in the pipeline) it was great to have both of our sons along for the morning, the first time we'd all been together on a Saturday morning for some time. 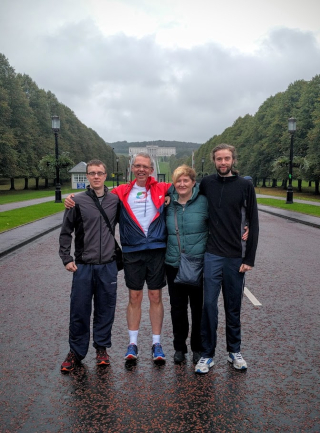 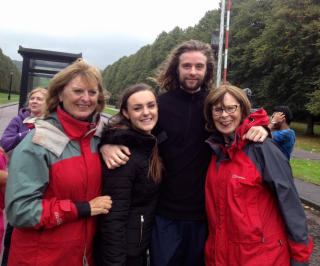 There was a big turnout from BT, over 30 work colleagues, with 9 running their first parkrun. 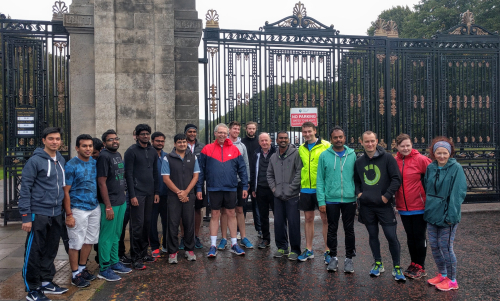 Through the week, rain was forecast for Saturday and, with parts of Northern Ireland experiencing stormy winds, I received several texts on Friday checking if all was ok to proceed.

On Friday night, Magda Bernatek, who I'd met at Stormont when we volunteered in March, messaged this motivating video - "Running in the Rain" 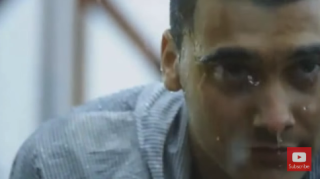 While there was some drizzle as we arrived at Stormont, I was clear that, Nope, this was not just a run in the rain but, rather, a culmination of multiple threads running over different timescales.

First, and fundamentally, running Stormont represented the completion of my first objective:

At Queens parkrun, I had met Linda Harley Gillespie, first woman to run all 22 NI parkruns.  That day, Linda showed me her hand-crafted #I'verunallthenornirnparkrunssoIhave T-shirt and promised to present me with my own at my final run.  True to her word, she did.

Thanks to Linda for parkrunner insights, presence and encouragement along the way. 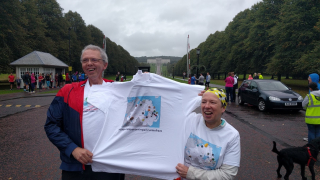 Second, there has been a relational aspect to this project that I never foresaw.

Ruth and I did not cross this project's finish line alone.  Rather, through the planning & travelling & running & occasional injury & breakfasts & stories shared, we crossed the finish line, and cut the celebration cake, connected with a wider network of people than when we started.

Patricia McAuley and Heather Chestnutt have supported from beginning to end - we appreciate their presence, humour and stickability. 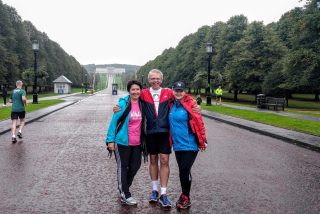 Third, getting to Stormont confirmed how far I've come in three years.  Laura Croan, whose interview on benefits of exercise for patients has had 2330 views to date, was one of the nursing team when I was ill in 2013.  In recent months, it's been great to work with Laura and others to promote awareness.  Three years ago, getting to this day would have been unimaginable and laughable.  But here we were.

(Links to all of the interviews are in this post containing the final interview, with Dr. Kyle Matchett) 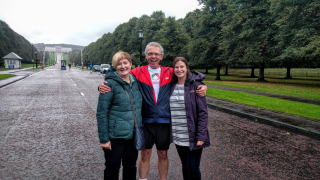 Finally, 24 September 2016 was a milestone on a longer journey.  On 24 September 1984, I went into hospital with Hodgkin's Lymphoma.  At that time, a great friend Roger Brown was studying medicine at Queen's University Belfast.  Roger 'showed up' for me and my family at that very difficult time - my dad was dying and I was ill.

Recently returned to Coleraine from Scotland he continues his GP work, and it's been great to reconnect.  As we walked up to the pre-run briefing, we swapped thoughts on years past and the run ahead. Run Director Mel Boyle, giving the parkrun briefing, asked me to introduce #TimPageFitForLife.  Son Downey had asked me that morning "What are you going to say?"  I hadn't thought about it until then, but I was ready with a few (very few, as directed by Ruth!) words on my story and project progress. 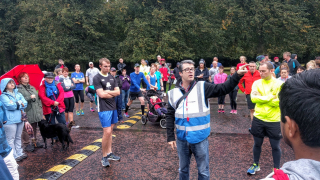 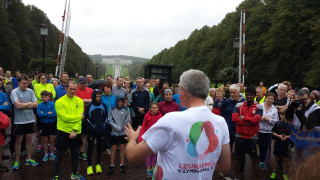 Soon, we were running, and what a great set of people I got to run with - family, friends, colleagues and specific guidance from both my Fitness Trainer of 18 months, EXSTO's Michael McAuley, and Parkrun Jim himself.

I had run the course earlier in the week with Sarah Williamson, taking about 38 minutes.  It was good to have already navigated the bends, and to know to be careful under the trees where the odd twig might just be waiting to trip you up. 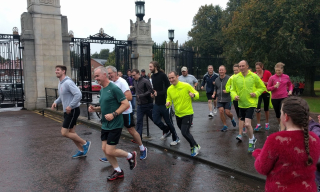 I was mindful of my Personal Best to date of 35:10 (Derry), although experienced runners Sarah Williamson & Mark Crothers had separately advised me to enjoy the day... there would be many other days to focus on time performance.

My time at Stormont was 35:14 and, for whatever reason (hills?, drizzle?, emotion? - maybe all of the above) I found the 2nd lap of the course tougher than expected. 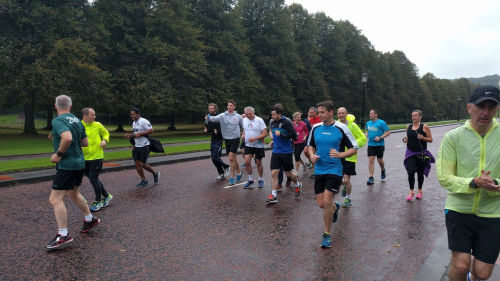 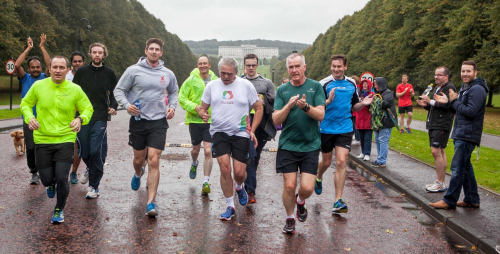 The encouragement from co-runners and cheers at the finish line were powerful stuff.

And a big "Thank You" to the Stormont Hotel for kindly supplying tea and coffee on the day - much appreciated by runners and supporters. 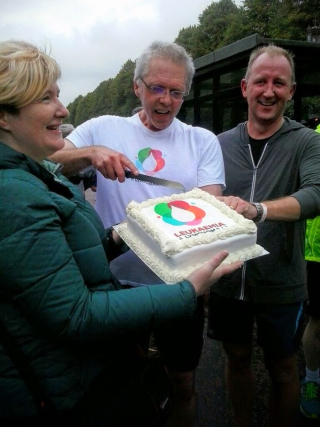 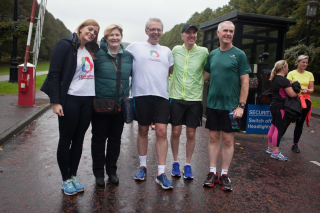 I'd invited political representatives from across the spectrum to come along.  NI Finance Minister Máirtín Ó Muilleoir ran and was then very encouraging during my last few hundred metres.  Active on social media, he tweeted a video at the finish.

Good friend David Robinson took some great photos of the day, strategically located at a choice spot with his high-tech camera.  I like this photo because it presents a backdrop wide enough to contain the different threads coming together in my head and heart, experiencing both personal challenge and stirring support at the same time. 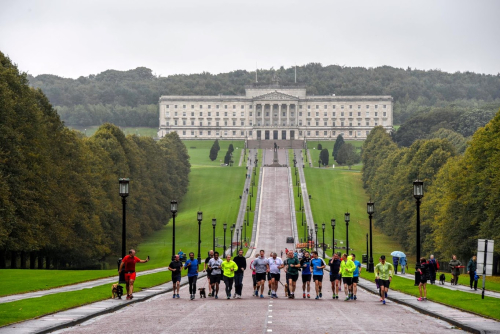 One further reflection.  Over a year ago, I bumped into a nurse who had cared for me in (the long-since demolished) Ward 22 Haematology, Royal Victoria Hospital, during my mid-80's rough chemo days, before research sorted out effective anti-emetic drugs.

I have been pondering these words before, during and after my run at Stormont this 24th of September, 32 years of life later.

Yes, last Saturday was about more than "A run in the rain".

I suppose those things include

The Stormont photo album is here , or here on Facebook.

Thank you for your interest and support.

Awww Tim, what a really lovely blog to finish your journey! It wa sa pleasure and honour to be a part of it, and I wish you happy runnings in the future.

Proud to be part of this bigger thing for one day at least. Proud to be your friend still after all these years, and proud of you big guy!!
( PS 2 more people gave me another 40 quid for the fund raising- so they did!!)