With only Stormont to go, Larne parkun may prove to be the day with the bluest sky - a glorious drive up from Holywood, and a great day for the first Larne 10k event.  I will aim to do this next year. 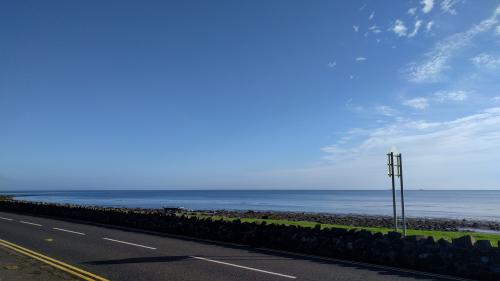 Chris McGonagle gets the prize for furthest-travelled supporter.  Chris, formerly a BT colleague, has been encouraging me from Austin USA for months.  Back home in Banbridge for a few days, Chris drove to Larne to run his first parkrun.  I really appreciated Chris' presence - it was good to swap notes on running, IT, recovery from injury and resilience.  We were pleased to meet up with Phil McIlwrath and Rosy Ryan so soon after Rosy's Lagan10k run last week for Pancreatic Cancer UK.  And great to see regular co-runner Heather Chestnutt again. 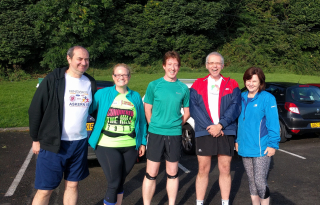 Dom Dorris, Run Director, gave a warm welcome to everyone, introducing Larne as one of the tougher parkruns.  I like quotes, and, talking about the hills at Carnfunnock Park, something Dom said rang true:

"The hills are your friend."

For me, this relates to another philosopher's quote which can be true.  Sometimes. 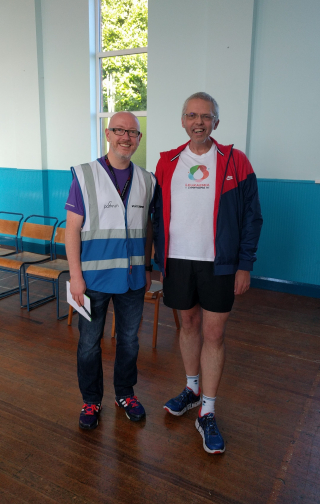 The run was certainly tough, at 44:01 one of my slowest.  I put this down to the repeated circuits up the hills... however, after the race, Dom explained that the heat of the day is not necessarily the runner's friend, and I can see this is true.  Photos from the day show a lot of perspiration on a lot of people!  Great to have BT colleagues Mark Crothers, Michael Fulton, John Kelly and Laurence O'Hagan running alongside. 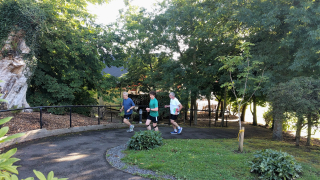 And so, at last, I got to meet Gillian Craig, regular runner at Larne parkrun.  Gillian has an enviable PB of 31:27, and her story, including aspects of living with cerebral palsy, was recently on the parkrun weekly newsletter.  Thanks to Gillian for encouragement and support.

"Because of parkrun, and in particular the volunteers at Larne parkrun, I don’t just watch sport from the sidelines anymore. I take part. And I don’t just cheer. I get cheered on. From my family and from the bottom of my heart, I can’t thank the parkrun community enough for your support and encouragement." 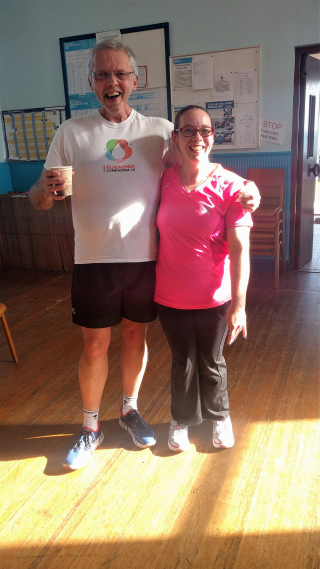 Many Larne volunteers had to leave on time for the Larne 10k, but Ruth was still able to secure a very upbeat photo! 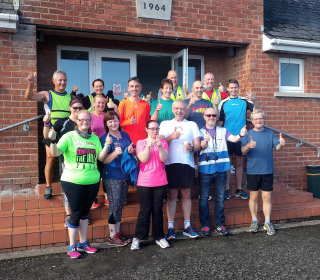 After tea and biscuits in the Sea Cadets' Hall, we drove up the hill to the Parklands Cafe for coffee with Rosy & Phil and David & Fiona Robinson.  On a day as good as this, this was a great place to enjoy the view. 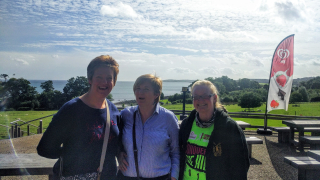 And now, one single parkrun remaining - Stormont on 24 September, the 32nd year to the day that, as BT Industrial Placement student, I went into Ward 22, Belfast Royal Victoria Hospital very ill with Hodgkin's Lymphoma.

Before then, it's a full week for #TimPageFitForLife:

On Friday, we attend the launch of LLNI's #ImStill campaign

And - keep an eye open for a series of six video interviews with people from the domains of medicine, fitness training and LLNI's research.

Come along to Stormont parkrunon the 24th if you can.

"The hills are your friend."