With BT Riverside Tower a mile and a half away, Ormeau was, as David Mark said the "BT home match".  I really appreciated the great support this week from many colleagues at this beautiful course on a midsummer day.  Thanks, also, to Sue from RQIA who came and ran alongside me. 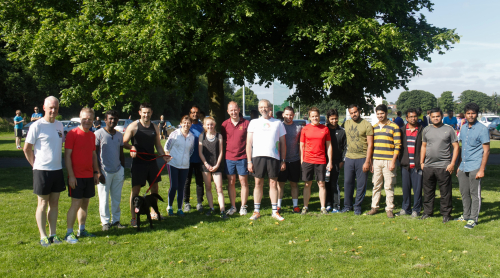 In 52 years, I don't recall being in Ormeau Park.  It's another beautiful place - recommended for a walk or run. 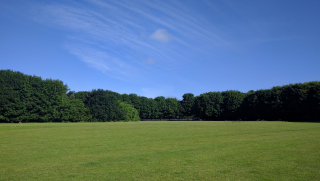 From the first of the 22 parkruns, my target has simply been less than 40 minutes. However, I mentioned to Gavin and Mark that this time - with a flat course and unprecedented support - I had the PB from Limavady 35:42 in my sights.

Run Director Gerard Walls gave everyone a warm welcome.  We chatted briefly before the run and it became clear that here was someone promoting health and well-being locally. Gerard agreed to a video interview after the run before he moved on to guiding the Couch 2 5K participants arriving at Ormeau later that morning.

Once again, I struggled to keep my head up as the run proceeded.  I seriously need to keep working at the conditioning training, including a specific focus on strengthening my trapezius muscle.

Thanks to the Ormeau Volunteers and the posse running with me for encouragement around the course.  I was pleased, after some exertion, to have knocked 29 seconds off my PB, now down to 35:13.

After the run, with Ruth as camerawoman, we recorded this video interview.

As a Health Promotion Specialist, Gerard works within the community, including with people facing challenging circumstances at home, work and/or some sort of trauma.

Gerard encourages people to look at health in a holistic way - including mental, physical, emotional and environmental angles.  "It's down to resilience" and "taking life by the horns" to live life in ways that promote happiness and well-being.

Considering the demands of life and work Gerard asks "are you taking time out?"

For people in the Ormeau area, here's information on resources.  Zooming out, there is also the wider Jog Belfast initiative including Couch 2 5K and Beyond 5K. Information at UK national level is here.

The Ormeau photo album is here.

Looking forward to Antrim next week!